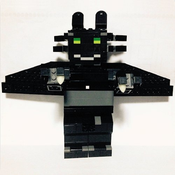 Here is my Jumbo minifigure model.  It is approximately 4 times the size of a regular LEGO minifigure. The model itself is built from less than 300 pieces and, with the exception of a few Technic parts to attach the legs, it is all bricks, plates, slopes and tiles.  It has movable legs, arms, hands and head.  Its body can also easily disconnect from the legs, just like a regular minifigure.  The legs can move from upright to seated (90 degrees movement forwards and 33 degrees movement backwards).

To have a creative set, bucket or box that contains the pieces that would enable you to create a Jumbo minifigure's legs, body, arms and head with extra pieces to be able to create different shirt fronts and hats.  For example LEGO set 10696 - Medium Creative Brick Box contains 484 pieces and I would expect that it would be possible to create a set of similar size and cost that would allow for my Jumbo minifigure model with left over pieces to create different shirt fronts, hats and possibly even tools or furniture.

I originally made a Smurf (shown in other images) and my kids immediately fell in love with it.  They would carry it around and pose it, but I had a problem with the leg attachment because it wasn't strong and the legs would detach or the body would fall because of its weight.  So I spent a lot of time working on that, trying to get them just right, with the right amount of clearance to move the legs and the right amount of friction to enable the model to stand up and support the weight of the body and head.

Now that it is sturdy enough the kids want to build their own but while we have a lot of LEGO, finding the right quantities in the right colours can be difficult and I thought that it would be great to be able to simply buy the model.  We recently purchase a large brick box which has tons of bricks in it, just not quite the right ones.  So I thought that maybe it would be a good idea to submit this project to LEGO ideas. This got me thinking about coming a with a more refined design that would make it good for kids with the ability to get creative and use their imaginations a little and I came up with the idea of a model that makes it fairly easy to change the shirt front design and potentially the face also.

As you can see from my other images I have come up with a few simple designs in LEGO Digital Designer which makes it really easy to try different things out and create nice images.  It shows how easily you can redesign the model.  It could be a lot of fun trying to recreate a scale model of your favourite minifigures.

Another cool thing about the size and scale of this model is that it makes it really easy to use 2x2 bricks to build things to scale with.  So if you have boxes of regular bricks it is easy to make tables, chairs and other furniture and utensils that scale well to suit this model, without being so large that you need too many bricks to do it.

I am not really sure which specific shirt style and hat is the best, but I am also not certain that this is an important part of the concept, at least at this point.  LEGO will know which themes are the most popular and if my idea manages to make it that far it would be easy for them to work out what they think would work well, but feedback from the LEGO community would also help.  The Fireman/Police man pair has the least differences between the two models. But I feel like having a bunch of 1x1 and 2x1 plates of varying colours to enable you to design your own shirt fronts would be the best way to go.  The whole idea here is to have the right pieces to get the base model correctly, then you can integrate with other LEGO that you already have to come up with new designs.

I hope you like my design and are inspired to make one for yourself.  If you have kids then make one with them, I am sure they will love it as much as my kids do.  My daughter has tea parties with the Smurf!  I would love to see what designs you can come up with.  I would especially love to see how you would model characters from all of the LEGO minifigure series so far.  For me hair is the challenge, I just can't work it out, but I am sure there are plenty out there that could.  For kids it doesn't have to be complicated though which is why I feel my design would work well.

Even if my model doesn't make it all the way to the top, it would be great to start a Jumbo minifigure trend!  Thanks for reading.