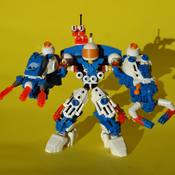 The Ice Planet MechSuit is born...

Imagine seeing a set in the Lego Store that ticks the following boxes:

Advantages of supporting this set:

Finally, it would be great if the LEGO Group could keep the cost of this set as low as possible. Somewhere in the region of £20 / $20 would surely be cost effective given the small number of parts.

CLICK SUPPORT (and hopefully we'll see this great theme and technic figures back on the shelves).