Workshop in the Woods 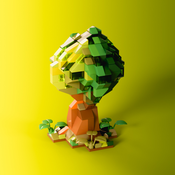 By LEGOTREE
127 comments
I am so excited to present you my MOC so let's get right into it.
Recently I stumbled upon some interesting pictures of car graveyards in forests and thought it's a great inspiration for a LEGO Ideas set!
In my LEGO Idea I tried making both, the abandoned cars in the forest and a workshop where these can be fixed!
The workshop has everything it needs to make the old car wracks nice and shiny again. The cars can be washed, towed in, repaired, the engines can be taken out and lifted with the crane and in the end the cars can be painted and sold.
All this wouldn't be possible without a great team of specialists, we have a driver, mechanics, a car painter a seller and most importantly the guy who started it all. The team became a little family over the years and love continuing their passion.
I designed this MOC, because as a child I would love to have such a set to play with and as an adult I would love to have it displayed (honestly, I would still play with it! :D)
All cars have doors, hoods and trunks that can be opened, engines that can be taken out and the cars are fully repairable. Means the set would include all the parts to make the cars look both, abandoned and repaired. The truck has a working crane.
In the workshop, there's a crane that can be moved to several positions above the vehicles and a ramp that actually works.
The whole workshop can be opened for better access. (It could be potentially made completely modular, connected with pins like I did with the break room)
Next to the play features I wanted to make sure that the set looks good for displaying it, adding a bunch of details.
I love how human made things blend in with nature and tried putting this idea into my MOC.
The Workshop was actually an old barn before and has been modified, and the crew also added a little break room!
I believe it would make a great set because I can see how it would make both, children and adults happy.
Also far as I know we haven't had anything like this before, repairable cars in forests.
It offers a bunch of playfeatures and a whole lot of ways it can be displayed. I tried showing some scenes that can be played with the set but that's just scratching the surface. I think it can be very well included into a Lego city but would for sure look great on its own as well.