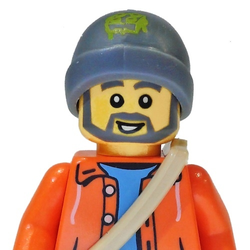 Expanding from the “Classic Space Adventures” series of redesigning work, this new LL918 Space Transport is the latest addition to the family, after the new LL928 Galaxy Explorer project ( see https://ideas.lego.com/projects/68687).

The “918 Space Transport” is a Classic Space LEGO set released in 1978. It was one of the very first sets of LEGO Space.

In this new LL918, the redesign largely focus on enhancing while retaining the notable aesthetics from the 1978 design: the angled slopes, the blue/grey/trans-yellow brick palette and the abundance of “studs-on-top”. Modern bricks such as curved slopes are consciously avoided unless structural stability requires them. Many recognisable features from the 1978 version of LL918 are preserved, such as the sirens, antenna, cone exhausts, tails etc. This is a conscious effort to make this new LL918 a nostalgic build.

The new LL918 is also designed to have the same ship-length and wing-span as the original 1978 version.  A major change is the additional details on the belly of the ship. The 1978 LL918 has a rather uninteresting anti-stud bottom. The new 2015 LL918 spaceship uses the “studs-on-both-sides” sandwich design to allow for more details or greebles under the ship.

Finally, the LDD file for this project will be made available soon; so do watch out for the updates on this page.

Thank you, I hope you like this work. Do support this project if you like the Classic Space to have a chance to return to the shelves again!