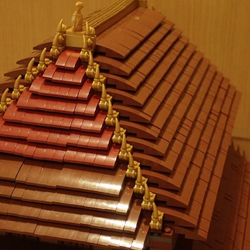 The Great Wall, one of the greatest wonders of the world. It winds up and down across deserts, grasslands, mountains and plateaus, stretching approximately 13,170 miles from east to west of China to fend off the invasions from the Huns in the north.

It began as independent walls for different states when it was first built, and did not become the "Great" wall until the Qin Dynasty.

In the past few decades, the forces of nature and destruction by mankind are bringing about gradual reduction of extent of the Wall with the result that less than 30% remains in good condition. To arouse people for the concern of the Great Wall, this is the reason why it is built.