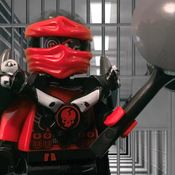 Welcome to Mannfield Stadium!
Mannfield is one of the most popular arenas in one of the most popular video games: Rocket League. If you don’t already know, Rocket League is a competitive vehicular soccer game that was produced by Psyonix in 2015. It combines cars and trucks with soccer for lasting fun and competition. Mannfield is one of, if not, the most played and iconic stadium in the game.
I decided to build this since I enjoy Rocket League a lot and the only thing I like more than soccer, cars, and video games is LEGO. So building this was really fun and it would be amazing if it was able to become a real LEGO set. To help this take a shot at becoming a LEGO set, you can click the support button at the top of the page and make sure to share it with your friends! 10,000 supporters will allow it to go into an official LEGO review!

There are four vehicles in the model, two cars and two trucks. The blue car is Octane, the red car is Breakout, the orange truck is Road Hog, and the green truck is Merc. I chose these specific vehicles since they are some of the starter vehicles in the game, along with being some of the most popular ones.
There is also a garage that offers customization to make your Rocket League vehicle your own. There are 6 toppers, 6 antennas, 4 rocket boosts (2 of each), and 6 types of wheels (4 of each). Each of them is shown in the images above. The toppers from left to right are Brunnehilde, Pirate Hat, Cherry Top, Mohawk, Top Hat, and Taxi Topper. The antennas from left to right are Planetoid, Smiley, Dollar-Sign, 8-Ball, Heart, and Safety Flag. The rocket boosts from left to right are Flamethrower, Ion Red, Standard Pink, and Thermal Blue. Lastly, the wheels from left to right are OEM, Stern, Falco, Veloce, Rat Rod, and Tunica.
Finally, there is the main model: the stadium. The stadium consists of 2 goals, 16 small boost pads, and 6 floating boost pads. The field is an oval shape, with curved pieces around it, and is a flat green for the most part to create an authentic experience that is very similar to the game. The field has two sides, one being orange, and the other being blue for each opposing side. At the center of the field is a circle to place the ball.

Good question. There are many reasons why I believe this would be a great and successful LEGO set. Here are just a few.
Popularity: This model would be popular among many people of all ages. Not only would it be of interest to some of the millions and millions of Rocket League users and Esports fans across the world, but also LEGO fans who enjoy cars, customization, video games, and/or large display pieces. The model also offers many different qualities to interest any LEGO builder!
Playability and Display: With this model, you can also play with it or display it. You can enjoy driving around the stadium in your own custom car, or “playing a match” against a friend or family member. You can also exchange an antenna for a different part (Part 99784, which is included with the model) for extra playability (as shown above). Along with this, you could show epic saves, amazing goals, or even recreate them from your favorite Esports games and championships. All in all, the model provides what you need to play and use your imagination.
In addition to this, the stadium can also be displayed and shown off at home or in an office. The unique design is sure to impress others. It also looks good with other sets, so it would also be a great piece to add to your LEGO collection, or a great model to start one.
Customization: As said briefly beforehand, you can also customize your vehicle. There are over 100 combinations for each individual vehicle. This way each LEGO builder can make their custom vehicle their very own. Customization is fun for everyone, young and old.

The model was created using Bricklink’s Studio 2.0
The model has about 2,100 pieces
All of the designs are my original with paint.net and the Rocket League logo is used.
None of the pieces are custom shaped, only existing LEGO licensed pieces were used (except with different colors and decals).
Thanks for reading!