Pixar's The Incredibles v.s. The Omnidroid 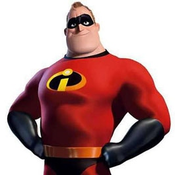 The final fight between The Incredibles and The Omnidroid is one of the most captivating moments in one of Pixar's best films, The Incredibles. My goal was to build a set as accurate, but just as fun, as the movie itself.

The set includes five minifigures: Mr. Incredible, Elastigirl, Violet, Dash, and Syndrome. The Omnidroid includes four fully articulating legs that can detach as depicted in the film. The head can rotate a full 360 degrees along with a side-mounted gun. As shown in the photos, The Omnidroid can stand on 3 legs to accurately recreate scenes from the movie.

Overall, it's an accurate and creative depiction of the movie. It's an enjoyable build for all ages!

Please Support! Thank you for viewing!