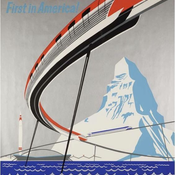 This model is a replica of the first monorail in America, the Disneyland 1959 transportation of the future! These trains were designed by Disney Legend Bob Gurr for the first major expantion to the Disneyland property. The Mark I train opened on June 14th, 1959 and ran until 1961 when it was succeeded by the Mark II. Two were constructed, Monorail Red and Monorail Blue. As of 2017, almost 60 years later, the monorail is now in its seventh version, located at both Disneyland and Walt Disney World. This recreation is the first Mark I Monorail Red constructed in LEGO form! In addition to this project I would like to build the different versions with different designs, which you can find updates for on this Facebook page:

Thanks for all your support and keep on building!