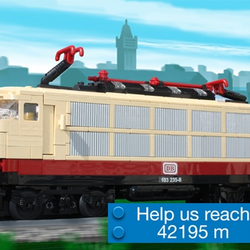 We proudly present: 4 in 1 wagons/carriages for the DB 103 Class locomotive

If the project becomes an official LEGO Ideas set, you can choose to build each of 1 of the 4 different wagons/carriages you would build. If you want to have all 4 running on your train tracks on the same time - you must buy 4 boxes.

See all the details in the pictures. And please remember to take a closer look at the locomotive https://ideas.lego.com/projects/102291 - a suitable locomotive for pulling these wagons/carriages.

The iconic DB Class 103 was the reference to one of the most beloved LEGO trains sets 7740. Our goal is to have this new version become a real LEGO product, but it is by far the only goal of this project.
In 2013 the RLUG Danish ”Byggepladen” achieved a Guinness World Record for longest plastic toy train track. 4,000.25 meters (13,124 ft 2 in) all done in old blue LEGO train tracks. Danish Lego enthusiast Henrik Ludvigsen was the man behind the project, and now he and Byggepladen is going to go even further. Actually 10x further.

The iconic marathon distance has been covered by athletes all over the world, but to build the tracks out of LEGO train tracks is a daunting task. The first hurdle is the 329,718 LEGO tracks that are needed, and this is where you can help by supporting the DB Class 103 project.

If the DB Class 103 project reaches 10,000 supports and becomes a LEGO Ideas model, the 1% of the total net sales will be used to purchase the LEGO tracks and make this record become a reality. If the project never becomes a reality the 1% will be donated to UNICEF.

We are planning to make the new Guinness World Record in the summer 2017.

Please vote - thanks for your attention. Feel free to ask in the comments area if you have any questions.