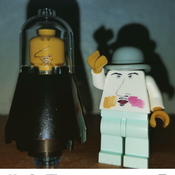 The Octopod Battle Droid is considered "the ninja" of robotic warfare thanks to its ability to disguise and to fight intelligently. Hidden in its abdomen, a set of high-tech weapons is unfolded to reveal its best defense: to attack. At the bottom of the robot, a set of two devices that serve as analyzing, tracking, and also miniguns can be found. Thanks to its flexible body, it is able to adapt many different positions. The same statement goes for the set of lasers coming out its abdomen, allowing it to aim better without having to lean around a lot.

My high interest in arachnids and my love for science fiction films were a major inspiration for designing this set. It has always fascinated me the way spiders live and the things that they can do. This, in addition to my passion for artificial intelligence and high-tech weaponry, has been inspiring me for a long time, to create something like this.

This set is great for teenagers and adults of both genders. This would make an interesting "Godzilla-like" decorative feature to have for people who have entire towns built from LEGO, or as an additional character to any other lego sets such as Agents, Star Wars, or pretty much anything superhero related! It will also make a great stand-alone character, giving it up to the user's imagination of what kind of warrior it should be. In addition, by collecting a few Octopod Battle Droids, one can make their own army of robots!