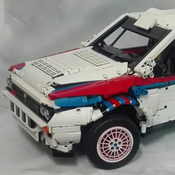 The Lancia Delta Integrale is a sporty version of the Lancia Delta, explicitly designed to participate in the World Rally Championship, in which it competed from 1988 to 1993 obtaining 5 world constructors titles and 35 victories.

At the Frankfurt Motor Show in September 1987 the first evolution of the Delta HF 4WD was presented: renamed Delta HF Integrale, it was updated in some details, both stylistic and mechanical.

Externally the new version was recognized for the enlarged fenders, the new design of bumpers and miniskirts, the new front air intakes and on the bonnet, the alloy wheels of 15 instead of 14 inches.

As for the mechanical part, suspensions and braking system were improved. The power of the 1995 cm³ turbocharged engine and equipped with intercooler, went from 165 hp to 185 hp thanks to the adoption of a Garrett T3 turbine and a renewed electronic management.

The reconstructed set presents all the technical details of the 4WD version.

Under the bonnet the turbo-aspirated engine was rebuilt with a red and aspirated turbo head as in the RALLY WRC version of the 92.

The transmission moves the 4 pistons of the engine .

The frame has been designed to house 2 XL engines for transmission, 1 servo motor for steering, 1 battery and an IR receiver .

The cockpit was made with all the attention to detail highlighting the rally seats with 4-point safety belts, dashboard with red trim, fire extinguisher, steering wheel driven by steering wheels.

On the roof of the car is the forced air intake, used for summer rallies, to cool the passenger compartment .