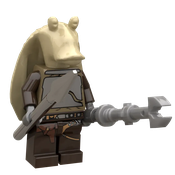 By Din DJarJarin
41 comments
The Sikorsky S-64 Skycrane is easily one of the most unique helicopters, and even with only a handful in existence it is highly recognizable. Designed in the 1960's, the helicopter remains unmatched in its practicality and has been utilized by militaries, private industries, and fire departments to this day.
At true minifig scale (1:44), this monstrous helicopter set contains 1,086 pieces and measures 22.8in long, 18.5in wide, and 6.7in high (excluding rotors: 19.1 L x 8.3in W x 6.5in H). The Skycrane can be built with the crane attachment or attach the fire-retardant tank to take on any fires in your Lego city! The crane can be lifted and lowered using a nob on the side (string not included). The fire-retardant tank can be opened on the bottom, and is hollow to allow for plenty of storage of fire-retardant studs. The cockpit has room for two pilots and a crane operator. A tool box can also be attached to the underside of the helicopter.
This build is dedicated to my grandpa, who after seeing my previous helicopter MOCs asked if I could make him his favorite helicopter, the skycrane. Being one of my favorite helicopters as well, I really enjoyed designing every unique aspect of it! All the cool greeblies make it feel like something straight out of star wars!
This project is dedicated to my Grandpa, who asked me to build this because it is his favorite helicopter! Because of his job, he's been lucky enough to see this thing in action, and anyone who gets that chance is immediately awestruck.