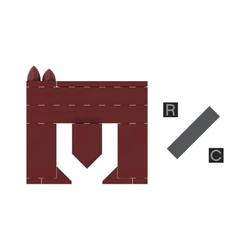 Deep inside a suburban family house, there lies a secret laboratory maintained by a little boy genius named Dexter. Welcome to Dexter's Laboratory!
This is Robo-Dexo 2000, Dexter’s most iconic invention which is a giant robot mech that our favorite boy genius uses to save the world in certain episodes such as "The Big Sister" and "Last But Not Beast".
360° view of the model:
Details & features:
Robo-Dexo 2000 has a decent amount of articulation and also has a control room inside its torso for Dexter to pilot it! I even designed a removable pilot chair for Dexter to sit in, which requires his legs to be removed in order to place him in the pilot chair. I was unable to provide images of the torso's interior because the rendered images looked too dark on the inside. If anyone really wants to see what the interior looks like, please stay tuned for a potential project update.
Dexter minifigure:
The minifigure of Dexter is the most crucial part of this product idea. A new-mold hair/glasses combination piece would have been appropriate for Dexter, but I had to design him using existing minifigure parts in order to follow the LEGO Ideas guidelines. So if this project is approved by the LEGO Review Board, LEGO could produce Dexter's hair & glasses combo piece if needed. Dexter even includes a chemistry flask as his own accessory!
Part count:
Dexter with flask: 5
Hips & thighs: 70
Legs: 80 (40 per leg)
Torso with interior: 141
Upper arms: 16 (8 per upper arm)
Left forearm & fist: 64
Right forearm & fist: 64
Head: 76
Pilot seat: 16
Total: 532 pieces
Overall model:
As a huge, long-time fan of Cartoon Network who grew up watching Dexter's Laboratory and other classic Cartoon Network shows, I'd have to say I'm very proud of my hard work designing this model! I believe this would make a very great product since LEGO and Cartoon Network seem to have a very good partnership, especially after making products based on Adventure Time and The Powerpuff Girls.
Thank you for checking out my product idea and please feel free to support it! I hope to make this a real LEGO set in the future.
31
112
days left