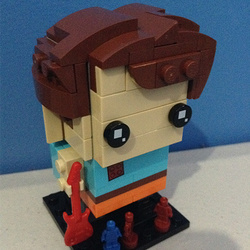 These four Ninja Turtle Brickhead Figures are Based off the new TMNT Movies: TMNT, and TMNT: Out of The Shadows.

Leonardo is wearing his blue mask, and holding two katanas (obviously). His front shell is covered by rows of sticks (like in the movie), and his back shell is bare.

Raphael is wearing his red hood/mask, and weilding his two Sai blades. His front shell has a leather strap going from waist to shoulder, and his back shell is bare.

Michelangelo wears his orange mask, and is armed with twin nunchucks. Both his front and back shell are bare.

Donatello is wearing his purple mask and is brandishing his wooden Bo staff. His front shell has two backback-straps, to support the miniature computer on his back shell. He also has some multifunctional goggles on his forehead, like in the movies.

There's really not much else to say about these, so just have a look and hit that support button! Thanks!