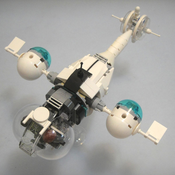 The TIE/D Defender, commonly known as the TIE Defender, is a high-performance TIE series starfighter established by the Imperial Navy Fleet Systems in Star Wars movies.  The TIE Defender is claimed to be one of the fastest starfighters, which was upgraded to two entirely new and powerful twin ion engine, in use during the Galactic Civil War.  Its triple wing design allowed for three arrays of maneuvering jets.

In 2010, under the theme of Star Wars, the LEGO Group launched 8087 TIE Defender with dimensions: 35.4 x 37.8 x 7.1 cm and piece 304.  In this project, we constructed a pocket-sized model of TIE Defender with fever bricks.  We try to make the model simple but preserve its accuracy.

We do hope that you enjoy this mini set of TIE Defender LEGO model.