The Batmobile & The Robin Wheel 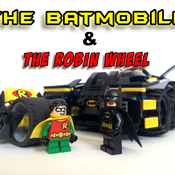 SKAPOW! SOCK! BIFF! The original inspiration for this MOC's primary gimmick was the 1966 TV series, specifically the Batcycle that featured an ejectable sidecar used by Robin. The "Robin Wheel" nests securely inside the Batmobile and is "launched" via a push slider at the rear. I thought the tricycle/Big Wheel would be a fitting design for a young superhero sidekick.

As for the design of the Batmobile, I culled together cues from a multitude of "mobiles" that I was most familiar with from the comics and movies (most notably, the face"/ramp = 1941 Batman #5 and 1986 The Dark Knight Returns).

Truth be told, I did not put much forethought into this build; I just dove into my son's pile of bricks and just made it up along the way. Nonetheless, I had a fun time making it!