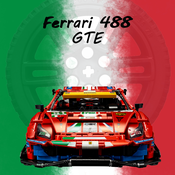 By platon_dr
43 comments
Released in 2021, the Nevera is the fastest car at the moment (yes, you read it right, it is actually faster than the rivals from other electric car brands). It is so fast, that it was even named after a European storm. In order to completely confess you that it is the fastest accelerating production car in the world, here are some of its specs:
Power (1.4 MW): 1.914 hp
Torque: 2.360 nm (1740 ft∙lb)
Acceleration 0-100 km/h (0-60 mph): 1.97 sec
0-300 km/h (0-180 mph): 9.3 sec
402 m (1/4 mi) time: 8.6 sec
Top speed: 412 km/h (265 mph)
Battery capacity: 120 KWH
Creation:
Building this car was very hard because of its forms, it is all about roundish forms that are hard to make out of bricks, that’s where the round slopes came in handy, I used a lot of them still trying to use the SNOT technique. Just messing around with different types of bricks, recreating all the details took a lot of time. In total, I spent about 50 hours just on building, but I had fun in the process. Two of the most time-consuming parts were, the turning system (that I did for some reason, although no one will be able to see it, but believe me, it is in there) and the headlights. The elaborate form of them was, something I didn’t think of when I chose this car to build.
The model:
The model itself consists of 2127 parts, has an opening boot, doors and several compartments in the interior.
There is no frunk, just in like the real car, all the space in the front is used for making the car faster, than any car before had ever been.
The interior is very accurately copied, there are several opening compartments, the butterfly doors open just like the real ones, except they’re a bit smaller.
Why did I make it?
The second I saw the car, I thought to myself “this would be a pain to build out of LEGO” and then I took it as a challenge. It would make a great set as LEGO also has to move on into the electric car future.
Anyway, I am very proud of how the model turned out, hope you like it!