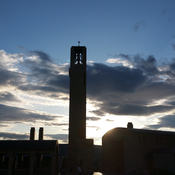 I am fascinated by the Titanic, and since a child I had dreamed of making a model of it. But I didn't want to make just any model. My dream was to make the most accurate model possible. When Lego digital designer was first introduced, I jumped on the possibility of having an endless supply of bricks at my disposal, finally allowing me to design something that I felt did it justice. Over the next few years, I refined my model, recently deciding to order the actual pieces needed to build it. I felt that my dream would not be complete without my very own real-life version of what I had struggled for so long to achieve. So having completed my dream, I found myself wondering what to do next. In short, this is why I am presenting my model to you! What better way to share my dream then to release it into the public, to have others decide whether or not they would want something like this in their own home!

Its construction enables it to be close to 7 ft in length, while only compromising around 11,000 pieces. In order to mimic the real Titanic's curves as well as it's rivets, I decided to use a frame of Technic pieces, positioning the frame as to allow flat Technic 2x4's 6's and 8's with holes in them to represent the portholes in the original. All of the deck area, excluding the funnels, is built in a conventional, ground-up style, simply resting on pillars positioned inside of the frame. It is to the 111th scale of the real ship, with a small, to-scale person included. I feel as If this model is about the closest representation of the real ship to date.

As to it's potential cost as a set, I definentely feel that there are those who would be willing to purchase such a behemoth. For example, the Taj Mahal(10189), with a piece count of 5,922 pieces, only had a PPP( price per piece, in U.S dollars) ratio of 0.051. Using this scale, the full Titanic model would only cost around $550. However, I am aware that it's size may be rather excessive for some people. Due to it's framework style design, it would not be difficult to simply (and funnily enough) cut it in two, mounting said section onto a small water scene.This way, it would be easy to portray the ship in any of the stages of it's sinking, cutting down the piece count by anywhere from 3-7,000 pieces while still showing the scale and grandeur of the ship as it should be represented.

Thanks for reading to the end; and I do hope that you decide to support my creation!  Do feel free to ask me any questions that you may have,  I will try to reply to them as thoroughly and as quickly as I can.