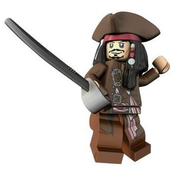 The Green Fog is an airship. This ship is owned by pirates. When you are interested in airship please look after my first creation (The Zephir airship) and support it too.

This ship looks like my first creation but with green and black baloon. This set contains 7 minifigures, 28 cannons, and 4 harpoons. Under the ship I have putted some invisible bricks to imitate that the sip is flying. The baloon is fixed enough to stay on the ship. I have made a captain's cabin too. On the back of the ship there is a steering oar too. I think this ship could be agood enemy to my before ship. I think the Lego can make from these sets a good airpirates set series. The cannons are my own ideas, and the harpoons and the shooter guns too. I think the green colour make it look like fearsome like the Flying Dutchman. The ship is fiddle headed by a skeleton. My next creation will be an airship port but to have it you should suppor my firs two creation please and it will come soon.