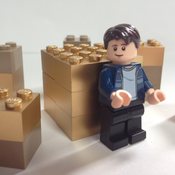 It's a bird! It's a plane! No, it's the first CBS's Supergirl set! Build the DEO's headquarters, complete with 7 minifigures and 4 separate rooms!

Includes computer screens and controls, as well as the briefing table.

Glass room built to keep alien villains like Jemm and White Martians in.

Contains weapons for the DEO's agents.

Spin the antenna at the top of the room to spin the wall and change Hank Henshaw into Martian Manhunter!