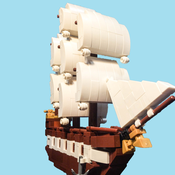 The sleekness and iconic look of the 18th century frigate ship has been something I have always wanted to capture in LEGO form.

I wanted to make sure the frigate that I designed was at a size that captured all the detail of the classic, 18th century frigate, but could still sit conveniently on my desk. In addition, I wanted to model it similar to the iconic Imperial Flagship model. While it was designed with display in mind, it can be used for play too!

This set comes with:

The term frigate was first coined in the 17th century to describe any warship with carriage mounted guns on one or two decks, designed specifically for speed and maneuverability. As the frigate advanced into the 18th century its definition expanded to one that had three masts with square rigging .

The rest is up to you!

I believe I have captured the classic look of the 18th century frigate in the creation I present to you today.

If you agree, I would appreciate your support to make this an official LEGO product.

Then you can have one too!