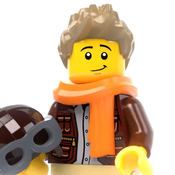 Flags whipping in the wind, the clank of metal as a sword is forged, the thud of the drawbridge being lowered: all of these are familiar sounds to the inhabitants of this castle in a forest.
This build is estimated to consist of 800-1500 pieces. It contains three knights, one wizard, a rat, and one frog.
The drawbridge can lower and raise, and the tower has three levels. The first level has a barrel which contains weapons, the second contains a chest full of treasure, and the third is the open area at the top of the tower where a minifigure can stand lookout for the castle. There is also a ladder on the side of the tower so a minifigure can climb up.
The building next to the tower has a table which holds a candle, a goblet, and a chicken leg. There is also an archway at the end of the building that leads into the tower.
At the bottom layer of the castle is a staircase leading to the upper levels of the castle, and an entrance into the back part of the bottom layer of the castle. This part of the castle has a barrel for tools and weapons, a shelf which holds a couple bottles on it as well as a key, and an anvil with a hammer. Underneath the tower and next to this part of the castle is a small dungeon, which only contains a rat at the moment.
This build also has a small path leading up the castle, five trees, a river, and four mushrooms.
I think that this would be a good LEGO set because it has a high level of detail, all levels of this build are accessible to minifigures by stairs, ladders, or doorways, and it is a pretty stable build. This allows it to be both playable and/or a decoration.
I hope you all like this build! Don’t forget to support it if you like it!