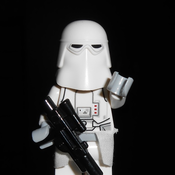 After a long journey, a robot lands on the surface of a planet in the Alpha Centauri system. The lander unfolds its solar arrays, and two flying probes leave the lander, explore the alien planet. The two probes meet an animal with long legs. They have found alien life.

This project simulates a fictive mission to an alien planet. The set has everything you need to make your own interstellar mission: pieces of ground of the planet, three animals, two probes and a lander. I'll tell you all about these parts.

The ground of the planet is made of grey rocks. The rocks are coated with moss.

Runners are fast animals with long legs, so that they can rund fast when they see a predator (that's why they're called 'runners'). The legs are made of parts that can move, so that you're able to move them in different positions. There are two runners in the set. They aren't exact copies, so that they look more realistic (no animal is exactly the same).

The clawer is a dangerous predator with long teeth and claws. It has 4 legs, but the legs aren't the same. The front legs have claws, and the back legs are made to stand on. The clawer can stand on four legs, but when it attacks, it stands on it's back legs and it claws with it's front legs. The legs, tail and neck of this animal can be moved.

The probes can explore the planet. They have 4 green things that can steer and power the probe. The probes have on the underside a movable arm with a camera. You can put the probes on a standard, so that it look likes they're flying. When you play with the probes, you can disconnect them from the standard.

The lander has four 'legs', so that it can stand stable on the ground. It has two solar arrays, those can be folted and unfolted. The probes can be connected on the lander.

I hope you like! I'm new in LEGO Ideas, so I don't know how everything works. I saw projects with pictures in the description, but how can I do that?