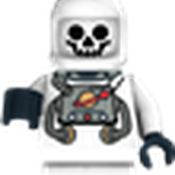 Porky is the primary antagonist of the game MOTHER 3 for the Nintendo Game Boy Advance. Porky was popularized through the Super Smash Bros. series. MOTHER 3 is an amazing and memorable game that deserves its own LEGO model, and this is it. The MOTHER series was never Nintendo's most popular series, but it has an extremely enthusiastic and passionate community.

Porky would be great for a LEGO set, because who doesn't like cool looking mechs? I was originally considering other things for a MOTHER project, but I felt like Porky really represented the series the best; and is in both MOTHER 2 and 3, in addition to the Super Smash Bros. series.

The model is basically Porky, the little minifig, inside of his bed-mecha. The mech has very moveable and poseable legs, moving teeth, a spot for a minifig, and can make all of its in-game sprite poses. If this was to become an official LEGO set, it could also include other minifigs, like Lucas, the protagonist of MOTHER 3, or the Masked Man, Porky's right hand man. Sadly I was not able to include either of these due to my limited supply of LEGOs, but I will try to add some more minifigs in the future.