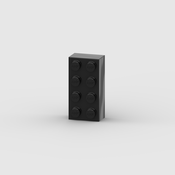 I'm glad to introduce you my first LEGO Idea: The World Trade Center

This is a 1:1000 scale model of the original World Trade Center complex built in Downtown Manhattan (NY).

The MOC includes the Twin Towers (World Trade Center 1 and 2), the Marriott Hotel (WTC 3) and the other minor buildings (WTC 4, WTC 5 and WTC 6); it also has the representation of the plaza with the fountain and The Sphere. This model does not include the World Trade Center 7, since it wasn't part of the original Minoru Yamasaki architect's design of the complex, but it was added later on 80s.

I conceived this MOC as a part of the LEGO Architecture line, and I think that it could stand cool near other sets as the Empire State Building or others NY related and Architecture sets.

I also tried to make the model as realistic as possible, using those pieces that best recreated some typical architectural elements of the complex, for example the fluted bricks perfectly represent the external façade of the Twin Towers, characterized by thin windows alternating with steel columns; at the base instead the columns were thicker and spaced, so I used the side profile of the 1 x 3 plates arranged vertically, obtaining a visual effect very similar to the reality. Building the hotel was quite easy, thanks to the slanted plates, while buildings 4, 5 and 6 required a certain ability to condense the formal but articulated style of the buildings into a few pieces.

The choice of colors follows the way in which the skyscrapers reflected light, the towers were in fact alternating dark grey, in correspondence with the so-called "skylobby", to a lighter grey; these colors were due to the aluminum cladding of the steel columns. The buildings 4, 5 and 6 were instead of black color while the Marriott hotel was white with windows that generated a dark reflection, this was therefore the range of colors used for this model.