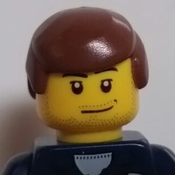 By luvlego4life88
12 comments
Shoot for the stars in the ER-X1S, Testing the limits of the Lego Astronaut and the Solo research and exploration space craft. I built this model over several months with the intention of integrating a functional retractable landing gear on a mini figure scale Jet. I gave up several times (struggling with not modifying any bricks. A 1x2 axle brick instead of 2x2 would be really nice) Eventually I adopted a few technic pieces and decided on this element arrangement. The cockpit opens providing easy access to the pilot and controls. This modern space craft features heads-up display for a less distracted operator. The retractable landing gear is easily finger operated and features accessory racks on rear gear. If I had the option I would have built it in all orange and white. Though I really like the retro modern color scheme with the blue. I'm sure other lego enthusiasts would also enjoy having the lower cockpit element available in orange. Features : • Retractable Landing Gear • Opening Cockpit • Accessory Racks attached to rear gear. • Particle Accumulator ( clip on accessory) Thanks for viewing my project. Please support and share