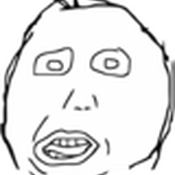 The Nova-class battle cruiser was a capital ship used by Hapans. It formed a large portion of their fleet. It was 400 meters long and could carry a crew of 1700 Hapans. Nova-class battle cruisers were frequently used to take action against the pirates and smugglers (for example Han Solo) who were doing their "job" in the wealthy inner worlds of the Hapes Cluster.

Sturdily built model from 1789 bricks. If it was made into an actual LEGO set it would need a supporting stand because of the ship's shape. The lid of the cockpit can be opened and there's space for a few minifigures inside. Contains 3 members of the ship's crew: captain, pilot and first lieutenant.