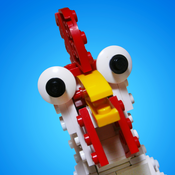 By razvan99h
30 comments
Origins
Located in the heart of Transylvania, Cluj Napoca is the second biggest city in Romania.
Built in an Architecture theme style, the Central Park Casino is one of the most representative and well-known buildings of the city.
The vibrant Central Park, home of the UNTOLD and Jazz in the Park music festivals, is one of the best attractions of Cluj Napoca, and the Casino located right in the middle of the Park has seen multiple generations of locals and foreigners relaxing, having fun, or enlightening themselves.
Over the years, the building has served multiple purposes, currently being used as a cultural destination and events center. Being built in the late 19th century, its eclectic architecture is closely represented using LEGO elements.
The LEGO model
The LEGO model consists of 1650 pieces that represent as closely as possible the small details, columns, windows and overall shape of the real-world Casino.
It was built with a modular design in mind, resulting in 25 different subsections such as the baseplates, arches, corners, sides, roof, etc.
It has quite intricate building techniques, elaborate details and inventive uses of particular pieces, but it was designed to be as simple as possible. The modular design is surprisingly sturdy and easy to assemble or dismantle.
The MOC was showcased at the Brickenburg Winter Exhibition of 2019-2020, in Romania, and also at the Skaerbaek Fan Weekend 2019, in Denmark.
Overall, the Central Park Casino is a medium-scale MOC built in the Architecture style, but with much more complex uses of LEGO building techniques, in the attempt of representing as closely as possible the beauty of the 19th century old building.
Why should you support it
If you are into ingenious building techniques, old buildings, modular design or simply into Architecture sets, I think you'll really like this build.
If you want the Casino to become an official LEGO set, your support would be really helpful and appreciated.
This is not necessarily an attempt to mimic the Architecture theme, but rather a different, modular and more fun to build way of replicating in LEGO bricks an icon of Cluj Napoca, an amazing city so dear to me.