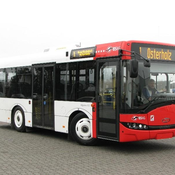 New vehicle added to the 1/30 "World of Buses.'' series collection.

Please support this project if you would like to have one on your bookshelf! Thanks!

This model was build in memory of one of the largest Hong Kong Bus company-- China Motor Bus.

CMB was known as the blue warrior for Hong Kong commuters,and on 2015/7/1 their final free shuttle service ended, which marked the total termination of their service after more than half a century.

This bus model is based on one of their only 7 buses left in the fleet. The Volvo B6 was coincidentally the last bus service leaving the stop. The livery chosen to be the current livery, with CMB on the number and Free Shuttle on the destination sign.

【Design of the Model】

The design was finished with most of our traditional standards, such as many movable parts, Lego Minifigure size, and qualified to be a REAL Model.

Take a look at the picture, any memories on the last day of their service?

This model comes with the authentic appearance (CMB VC1):

As was mentioned above, this model also comes with a lot of movable parts to play with as a model:

This model comes with more than 700 pieces, and an estimated cost would be $90. Hopefully with the mass production of LEGO, it could be lowered.

*Real photo is quoted from hkbus.wikia.com.

Thanks for your support! Please also share this project with friends and family. You could easily do this by sharing it on Facebook and Google+.