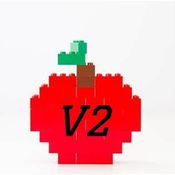 Why did you build it?

Ever had a rainy day trapped inside not knowing what to do? Or maybe you had a friend over or you want to do something new for family game night? Well, I present to you my latest build, a 2-Player Table Basketball game. I built this so families and friends of all ages can get together and have fun building with lego and playing basketball on a smaller scale.

What are the main functions of the set? How does it work?

To start, the overall build is two half-courts combined into one build. There are orange walls or dividers and the gray border bricks on the bottom of the build are used to prevent your opponent's basketballs mixing with your basketballs as well as to keep both of your basketballs in the court. As you can tell from the birds-eye view of the build, I tried to make the court as detailed as possible to a regular basketball court. Along with the orange walls, there are two built-in basketball nets and backboards (yes the backboard has the NBA logo on it) which you and your opponent are trying to shoot your basketballs into. Each time one of you makes a point, rotate the technic wheel (see picture 4) to add a point to your score. Due to the size of the technic wheel, the score only goes up to 5 so whoever makes it to 5 first wins the game. I also might as mention now that there are six basketballs, three blueish-purple for one player and three orange basketballs for the other player.  So, due to the amount of basketballs you would just have to keep recycling them throughout the game.  There is also two launching mechanism per court around the half-court line. For the launching mechanism, I used lego's super jumper and a few other pieces to hold the basketball. I also used an axle and the friction of two 44590 (per court) to keep the launching mechanism in place. With this in place, you can launch the basketball without the rest of the super jumper going with it. In addition to all of this, I used part designer, a stud.io product which lego owns now, to create custom stickers for the scoreboard. Finally, this is an NBA themed set because not only can people who follow basketball can relate to this more, it just makes the build cooler and more interesting overall.  Also, because this is an NBA set, it comes with an NBA logo plack, shown in pictures 1 and 10.

Why should I support this?

Well first, making a lego ideas account is free and it doesn't hurt to push that support button; we only need 10,000 of you great people to support this to have a running chance in becoming a set. Also, even though building this will be fun, it would be fun to play this with friends and family.

Check out my other desk toys and builds here: https://ideas.lego.com/profile/LegoApple_V2/entries#/?query=&sort=top

Also check out my youtube channel where I have new tutorial videos that'll help teach you about Studio 2.0, the lego building software I used to build this: https://www.youtube.com/channel/UCEJRzgkSWcBLfYh98xnIX9Q

NOTE: The NBA logo is only associated with my build because of the whole theme of basketball. However, this doesn't mean they are sponsoring me or anything like that.