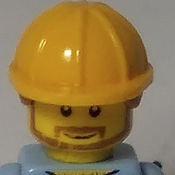 This is the classic chess game made in LEGO. Do you remember it? Oh yeah, you do. This set is made from 213 LEGO pieces. It includes all of the chess caractures you'll need- pawn (or soldier), horse (or knight), bishop, rook, queen and the main figure- the king. And a small 8x8 65-piece chess board too! But to play your favourite chess game in your favourite LEGO style you must click the big "support" button! I am REALLY proud of my supporters, maybe because it is my first published IDEAS project :-)

Hundreds of years ago, the first chess game rules (and figures and board) were invented in the India. The game is based on the war between two kings' armies. two players can play this game. Each player has his own army that constists of pawn, horse, bishop, rook, queen and the king. All units in your army move in different ways. But the task for all of them is to protect the king, who is the main figure in the game. If the king will not be able to move or beat other figures because is attacked by the opponent's units, the player loses. If not- he must trap his opponent's king to win. If the players both lost all of their units, the draw occurs. The strongest unit in the game is the queen. The weakest is the pawn. But the queen could be defeated by the pawn, is possible. However, the pawn could be stronger if it reaches the end of the opponent's board. Than it could be turn into the horse, bishop, rook or even a queen. There are more rules in the game, if you don't know them, you can read them here.

Now the chess is one of the most popular games int he world and even a sport.

Hope you have enjoyed my project, so you can support it by clicking the "support" button!