The Prison Tower of Carcatrael 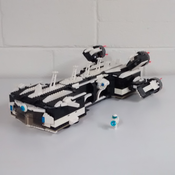 Hi, everybody! Thanks to the brilliant inspiration of my little brother I decided to build my first Lego Ideas project. To quote his succinct description: "We should build a prison tower! It would be a tower, and they would be in prison!"

So, we did. The tower itself is over a foot and a half in height (not counting the flags) and the solid-but-graceful bridge is over eight inches long. Mossy stone walls, swamp plants, a boulder, and the rocky waters of the moat complement the main attraction. And with a collapsing bridge portion, a (huge) secret door, and removable sections for easy viewing, this prison tower has playability too. Eight custom minifigures (and a large ogre) provide a great basis for acting out many a medieval tale (like the one I wrote at the end of this for your entertainment).

Please support my first Lego Ideas project, and perhaps most importantly, give me lots and lots of comments! Preferably not the "Cool castle thingy" or "It's good" kind. I'd prefer some constructive criticism from my fellow builders. What's particularly good? What's particularly bad? What could be improved? Any additional ideas?

Thank you for your support! If you are interested in the little story dramatization I made for this set, feel free to continue reading. Some of my minifigs seem to want personalities...

Deep in the Northern Moors lies a tower whose name will forever lay in infamy: Carcatrael, the great prison tower. They say few ever found it -- much less conquered it. Most would-be-heroes were lost in the treacherous waters and sinking mud of the marsh. But two heroes made it to that dread tower, and it is their story that is about to be told.

On a day when the shrouds of mist hung low and usual caws of the marsh-birds were silenced, two figures picked their way across the rocky waters of a stream.

"This is the stream, Elwik, I'm sure of it. Before now, there hadn't been any rocks, and Carcatrael is built on a rock foundation. We should find the villains who captured Sir Halwin before nightfall."

"Maybe so, Sir Ferrin, but right now I'd prefer a stream with less rocks." The young squire let out a strangled cry, and the knight looked at him disgustedly. "What? They're sharp!" The squire whined. The knight sighed.

At that moment, the veil of mist seemed to disappear before them, and a huge, grey pillar of stone rose up into the pale sky. Carcatrael. Orange torches flickered eerily in the dim light, and movement on one of the battlements told Sir Ferrin that their position had already been spotted.

"Now, Elwik, we have to get in position before they open fire!" The knight dashed towards the tower.

"Wait, archers shooting? Aren't we out of range of their archers?" THUMP! A rock as big as Elwik's head crashed into the earth a few feet away. "Oh, they have a catapult." Elwik ran after the knight.

Soon, they reached the base of the imposing structure. "Hey, it's only got a little metal gate. Maybe I could force it open!" Elwik ran up the stairway towards the bridge.

"There's traps." Sir Ferrin finished lamely as he observed the squire sputtering in the moat below. Firming his jaw, Sir Ferrin charged (carefully) up the stairs. They would not find THIS knight so easy to get rid of.

Approaching the entrance, the knight watched in surprise as the gate opened before him. But then he saw who was opening it. "Lord Aros!"

The tall, dark warrior brandished his sword. "Why hello, Sir ... Ferrin, was it? I hear you're quite the hand with that weapon of yours, and I'd been getting rather bored, so..." Without warning, he executed a quick slice at Ferrin's head.

The knight blocked it just in time -- but Aros merely smiled. "Not bad, not bad at all. How about this?" He executed a quick combination that left Ferrin scrambling to keep up. "What about this?" The dark knight swung his blade once more.

Meanwhile, Elwik was pulling his sore, wet body out of the (fortunately) shallow moat. "Oh no, not again! Last time I got this chainmail wet, I had to scrub the rust off for hours! Sir Ferrin's gonna kill me." But Elwik would soon learn that rusty chainmail was the least of his difficulties. CR-R-R-U-UNCH... The harsh grate of stone on stone rattled him from his complaining. Behind him, the solid rock wall of the Prison Tower was ... opening?

"Sweet, I can go in that way!" Elwik cried, and he started to swim across the moat. That's when he heard the rattle of metal and the grunt of heavy breathing. "Hmmm... that's odd. Do I have water in my ears?" Then an earsplitting roar notified him of his problem. In front of him, a 2,000 pound heavily-armored ogre was advancing through the opening in the rock. Elwik reached for his sword. "This is not my day..."

In the thick grass of the marsh, something stirred. A shiny grey helmet rose from the brush, looking about cautiously. Aros and Ferrin were still fighting, oblivious to anything else. It was now or never...

And that's where the story ends ... for now.