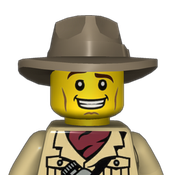 Penny Hockey is a game where you place the Penny, or Lego, on the middle peg. You take turns flicking the Penny to try and get it into the opposing players goal, the hole. This game is customizable, you can choose where each of the pegs go.

I built this set, because the original Lego Ideas set I saw was the maze and I thought Lego Ideas was all about customizable game sets. Even though this is not the case, I still wanted to make a set like that. In the finished product there would probably be more pegs so you can customize it better.

I feel that this would make a great Lego set because there are not many sets like it. It is a game, where as most Legos are buildings and stuff like that. Most Lego games have one set difficulty and is a board game. This is a different, customizable difficulty game.