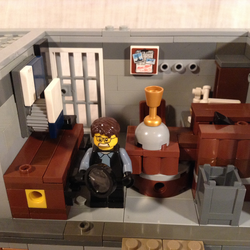 A great model for display, while still maintaining play value, the SwallowTail is packed with functional elements and intricate details that all make for a great build. This model's design mimics a small bird (the V shaped tail wings resemble the tail of a swallow, among other similarities), giving the model a compact, agile appearance. At the same time, there are countless mechanical features throughout that lend a touch of steam-punk to this model. The most notable is the large, functional sawblade which dominates the rear half of the plane. Watch the video above to see it in action!

Also included is a stand, which allows you to display the model either taking off, or in a dive (no modification necassary). The stand itself features a few mechanical details, like a short pipe and a spotlight.

A fun, engaging model that looks great both on a desk, or soaring through the bricky skies, the SwallowTail should appeal to builders of all ages.