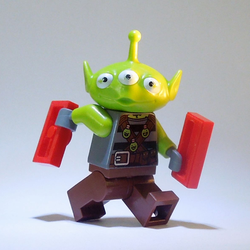 This triple bladed helicopter set powered by you and a few cogs spins at a 1:27 ratio so that each time you turn the wheel the rotor turns 27 times. The axles even twist as you turn the wheel proving that friction is a force to be reckoned with.

The adjustable blades give it more ways to use it making the blades flat will create less friction with the air and the rotor will spin faster but if you angle them you can fan yourself with cool air. The best angle is approximately 45* either direction depending on which way you want to blow the air.