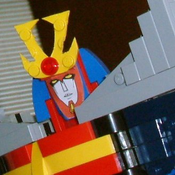 I made the astro droid R2-Q5

R2-Q5 was an R2-series astromech droid produced by Industrial Automaton and working for the Galactic Empire. R2-Q5 had black coverings highlighted by bronze access panels, and was a well-equipped droid with tools for repairing starships and special hidden spy devices. R2-Q5 was charged with storing the Emperor's plans against the Rebel Alliance within its memory bank as well as being personally responsible for programming hyperspace coordinates directly into Emperor Palpatine's shuttle during covert missions.

I try to create a “studless” design, with more accurate possible shape including most of the details of the original droid.

Droid is 12 cm. tall, I used a mid-size scale, similar to the new LEGO buildable figures sets, that allows to get detailled models, not too big, not requiring too much parts (around 220 bricks) and not too expensive to buy.

Many many Thanks and….  “May the force be with You!”