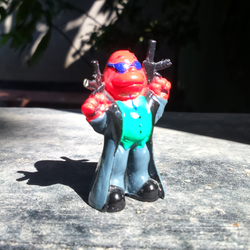 'You think you're so cool with your karate?' (с) Shanghai Knights

He is cool. He is one of the most awesome people alive. He is Jackie Chan.

Real comedian and the real stuntman. He inspired millions of people and made millions more laugh. And he's my hero.

One more thing! To celebrate his career, I decided to build something that will serve the same purpose as most of his movies: bring people fun. So, I built this set which is mainly based on 2000's animated television series. The series was chosen as an inspiration for Jackie Chan set because it has everything the good Lego set might have: recognizable outfit of the main character, detailed playable building and funny antagonists.

One more thing! The building resembles Uncle's Antiques shop which appears in almost every Jacky Chan Adventures episode. It is filled with antiques and references to as many Jackie Chan movies as I could possibly fit in there. And it's also fully playable since the building has a very strong structure which doesn't break easily. I also tried to keep it proportional to Lego minifigures.

One more thing! The set contains the building itself, two vehicles (a motorbike and a bicycle) and 4 minifigures of Jackie Chan and the Enforcers (Finn, Ratso and Chow). The building consists of the main hall, the second floor inside balcony and the training room. There are also some nice play features like the chandelier hanging on the chain, which can easily be dropped on the enemies when the chain is detached from the wall; the lower front window can be broken and then readily fixed; the middle planks of the table swing allowing more kung fu action to take place.

One more thing! If you are a Jackie Chan fan, I am sure you'll like to have this set, so please help it reach 10 000 supporters, by voting for it and sharing the information about it with your friends.

One more thing! There are many easter eggs that I've included in this set, so I wonder who can see most of them - share your thoughts in the comments! Also, feel free if you want to give me tips on how to improve this set or to include more references - in the end, we all just want the Jackie Chan set to be as worthy of its inspirer as it can possibly be.

One more thing! Have a great day!