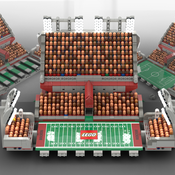 The SpaceX Starship is a rocket intended to carry up to one hundred people(!) to the moon or Mars(!!). Currently under development by the private company SpaceX, founded by Tesla founder Elon Musk, Starship is a reusable spaceship measuring 50 meters (about 164 feet) tall, and 9 meters (about thirty feet) wide. This huge rocket is also meant to be supplemented by a reusable booster, Super Heavy, which is itself another 70 meters (about 229 feet) tall. Together the Starship/Super heavy launch system will be the largest flying object ever built! It’s larger than the Saturn V rocket, which went to the moon and currently holds that record. The Starship, possibly measuring 117-120 meters (about 387-393 feet) tall would be about 7.3 meters (about 24 feet) taller than the legendary Saturn V!

Given it’s size, ability to be used over and over again, and relatively cheep launch price, this could have a very large part in the future of space travel. I’m not an authority on the subject but I most certainly would not be surprised to see this launching in the very near future. That in mind, I thought it a very nice idea to memorialize in the form of Lego bricks.

This particular model is built as a small display piece. It’s 35 studs tall, and has a wingspan of 14 studs. This Idea includes Starship itself and a display stand, which it connects to via clip and bar system. (Please refer to images)

I hope you like it! Thanks for your support!