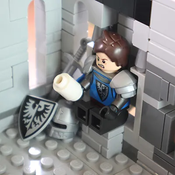 This is Pirate's Stronghold. It has docks, a great hall, armory, a gun deck, a bedchamber, an armory, a golden tower, a dungeon and captain's office. And This building was built in modular style. So it can open it's roofs and all gates, doors and windows.

The stronghold is devided into three parts(main keep, the port building, a golden tower). First part is main keep. it has six floor, and the ground floor is a great hall. The great hall have tables and stools, so pirates can have their meals. The first floor is gundeck, and this place is most mighty battle space in the stronghold. The second floor is pirate's bedchamber. The third floor is captain's office, and forth floor have balcony.