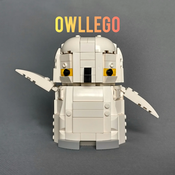 By OwlLego
18 comments
Please help Support K.I.T.T.
What is it?

K.I.T.T. From the iconic CBS TV show, Knight Rider. K.I.T.T is the name of the car which is Knight Industries Two Thousand. It is built with almost all black pieces. The seats took me five tries to make the perfect seat. It took me a while to get the front curved part of the car. I had to build the front of build the front of the car with the red pieces in the front. I also put red lights on the back of the car and has two windows for the back of the car. I also had trouble making the t-frame for the roof of the car, but I managed to make it. I used a mini sized replica to help build k.i.t.t. I also built a larger than minifigures size Michael Knight.

Facts about K.I.T.T.
K.I.T.T. Is featured in Knight Rider 2000, Knight Rider 2010, Knight Rider, Team Knight Rider and Code of Vengeance. K.I.T.T. is talking car and played by these people William Daniels and Val Kilmer. William Daniels was never featured in the credits during the show. K.I.T.T was almost not the name of the car. So K.I.T.T. is a Pontiac trans am. As the show was just starting they called the car T.A.T.T, Trans Am Two Thousand. Wilton Knight was the creator of the car which the car's name was based off him. The car had modification made on it when the season went on.

How did Knight Rider start?
The creator Glen A. Larson was known for Battlestar Galactica and Magnum P.I. and he came up with Knight Rider. A talking car that fights crime. He wanted to do lone Ranger with a car. He said K.I.T.T. is like Tonto in the Lone Ranger. Space Odyssey is a direct inspiration for K.I.T.T. The red light on the front was a trademark of the Cyclones from Battlestar Galactica.

Knight Rider Theme
Composed by Stu Phillips. The theme has a synth styling it embraces. It is based on a section from Léo Delibes's ballet Sylvia.

Ever since I first saw this car the first thing that caught me was the black color of the car. It looked like a stealth car. It had such a unique design to it. I built this with almost all black pieces besides the seats. The seats I made them with a light tan color. The next thing that caught my attention was that red light on the front. How wouldn't that catch your attention. I built the red see through LEGO bricks on the front of the car. The other thing that is awesome is the dash and the steering wheel. The steering wheel is not a normal wheel it is sort of like a 4-wheeler. I built this using four pieces. Watching the show makes you want this car even more. You have the feeling of wanting to be the Knight Rider like Michael Knight. I built this wanting to have something that I built like it is yours. You have your own K.I.T.T.

Why do I believe it would be a good Lego set?
The red light sleek black design, black wheels, dashboard, and steering wheel. Who wouldn't want to own a talking car. This is a classic car from the 80s. K.I.T.T. will make you feel like you can be the Knight Rider. The design of the LEGO model is great for fans of this car. If you like this build please support and share with others.