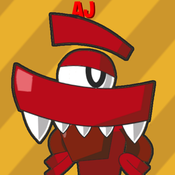 ''Nixels are annoying and destructive little creatures who are spread all over the land of the Mixels. They live to tear down and break apart the world around them, including any cool combinations that the Mixels create. In fact, there is nothing the Nixels hate more than when two or three Mixels combine together and get super powers. So the Nixels have made it their mission in life to put an end to such crazy creativity all together. And the only way to do this is to hide and destroy the cubits which enable the Mixels to combine in the first place. One Nixel can do little harm. But when they swarm together they can break apart a Mixel in seconds. So now you’re warned!''

''The Cloud Ship was a complex piece of machinery invented by Major Nixel in order to eradicate the Mixel species and bring in the dawn of the Nixels for good. The bomb inside of the ship is called the Mega Nixel Mixel Nixer.''

''In Mixels Rush, it contains the turbine controls for the Nixelstorm. The ship was eventually destroyed at the end of the game. The wreck resides in the Swamplands.'' - Mixels Wiki

This is an idea that i came up after making a custom Major Nixel, wich is the exact one shown in this Picture, including other Nixels:

Here are each of the Nixels's that appear in this Set: (Keep in mind that these Nixels use the ordinary face decals from LDD.)

That Nixel who powers the Ship:

This Nixel, like his name implies, powers the ship all the time, by the look on his face, he looks tired.

This Nixel is the one responsable for the making of this ship, some people say that he broke his leg when he fell (possibly even went to the doctor with his hat off).

Like the Builder Nixel, he was also the one responsable for building the Ship, except he didn't break his foot.

Major Nixel is the military leader of the Nixel swarm, serving King Nixel. He is one of the main antagonists of the Mixels franchise.

King Nixel is the Leader of the Nixels swarm, and the main antagonist of the Mixels franchise.

The Ship may not be 10% Accurate, but if you can see, the top of the Ship can come off easily, like most of the LEGO Sets, and, This Set was based on the LEGO Racers sets (mostly on the Big Sets).