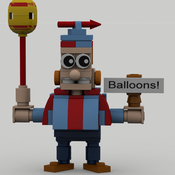 This is a LEGO project based upon Terraria's many bosses.

King Slime (second-to-last picture) is the lord of Slime and is arguably the easiest boss in Terraria.  The reason this model isn't rendered is because POV Ray wouldn't render it.  It is 43 pieces including the microfigure.

The Eye of Cthulu (first picture) is one of the most famous bosses.  I have used lightning pieces on the back and 1x1 tile to make him look more pixelated.  It is 26 pieces.

The Eater of Worlds (second picture) is the giant worm of the Corruption.  Hinged pieces allow the model to curve just like the real boss.  28 pieces.

Skeletron (third picture) is the Old Man's Curse at the Dungeon.  His head was hard to build because it had to capture the shape of a skull, so I hope it looks good.  The model is 61 pieces.

The Wall of Flesh

The Wall of Flesh (main pic) is the ancient core of the world.  With 161 pieces he is the second to largest individual boss.

The Mechanical Bosses (fourth picture) are actually three bosses: The Destroyer, the Twins, and Skeletron Prime.  Combined, they are  175 pieces.

Plantera (picture 5) is the overgrown plant monster of the jungle.  It has 3 thorn hook to travel around and a total of 64 pieces.

Golem (picture 6) is the stone guardian of the Lizarhd temple.  He was a very hard boss to create, but I believe I've ended up capturing him pretty well. 80 pieces.

The Lunatic Cultist (final picture) is the leader of the Dungeon Cult.  Jmjt4 made this boss with the smallest count of 8 pieces.

"Impending Doom Aproaches..."  The Moon Lord is the final and hardest boss in Terraria.  He is also the largest model; 247 pieces.