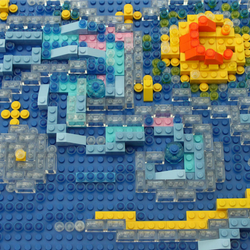 The beginning of the project is from an idea, "How wonderful it would be if every kid can have a Disney castle at home?". I still remember there was a day I watched YouTube video showing how excited the kids are when their parents told them to take them to Disney World. Because of this idea I decide to make this castle so there is a chance that kids can have it at home in the future. Besides this original idea I am both a LEGO fan and a Disney fan; therefore, I simply would like to make one for myself so I can fell magical happy!!!

This is my first time to make a LEGO set contains pieces approximately more than 1000 pieces. The total number of pieces would be between 1000 to 2000. The size of it is similar to regular LEGO castle set. The height is a bit taller and more details are included comparing to regular LEGO castle set. I made the castle at this scale purposely so the cost is relative low and less space required. Most important of all if there are more pieces involved for building the model it will increase the difficulty for kids to build it. It would also be too costly for parents to buy. Therefore, my idea is to present most details in less LEGO bricks.

I include Cinderella and the prince in the photo to show a  scene of prince showing his love to Cinderella. It is always fun to play with a castle!!!