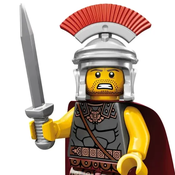 By Emperor Brick
38 comments
Hello my name is Emperor Brick from Slovenia and I have a big place in my heart for Ancient history. Therefore, it is in my honor to present you my Lego Ideas set - Ancient Roman chariot.
Romans ruled the world for a long time. They were one of the greatest civilizations who ever lived. When we think of them we think about their red shiny armor and their big shields. Well this is what this set represents - the power of Romans. The set includes thier unique curvy style chariot which is dragged by two horses. The commander of the X. legion is in charge of the chariot. But what is the commander whithout his soldiers. Therefore one soldier is by his side - the flag carrier of the X. Legion.
Like said the set is my tribute to one of the greatest ancient civilizations, which I am a big fan of. As an owner of the Colosseum I am missing some guards that will keep my Colosseum safe at nights. Therefore i have decided to bring 2 members of the X. legion back to life to guard it. Therefore I could say the set is also a tribute to one of my favourite sets - the Colosseum (10276).
I belive alot of people are wanting an ancient set from any era for a long time. Thats why my mind was 100% sure this is the genre I will go for. Than I wanted to create a set that would be accesable to every lego fan, thats why I went for a smaller set that everyone can purchase.
I think the set would make a great Lego set because of its display and/or play features. It is also compatible with the Colosseum and fits right in there.
The se contains:
" It is time that the Roman Empire rises".