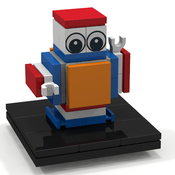 By X-Ray
2 comments
The Cube Tree,

When I discovered that 3 LEGO parts made a perfect cube (one 2x2 plate, one 2x2 brick and one 2x2 tile) I started with the idea to create a large cube of cubes.

The idea was born. I made several designs in LDD.

A must was that the base was not larger than the top of the loudspeakers I have (B&W DM16, made in the 1980-ish)

The design of 3x3x3 cubes was larger than the top of the loudspeakers, so I created *The Cube Tree*

In total 40 *open* cubes supported by transparant plates (1x1) and bricks (1x1) are used in this.

The Base and the supporting stem.

The small red-white-blue cube could be seen as:
- The Dutch Flag (Netherlands)
- A fruit/seed fallen from the tree