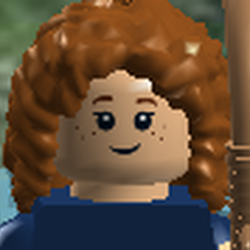 This is my second project and I hope you like it. It uses 330 bricks, and the minifigures included in this set are:

Merida and the suitors all come with bows, and Merida has her cape. She also has a hood and hair piece so that she can through off her cape and say "I am Merida, first born descendant of Clan DunBroch, and I'll be building for my own hand!"

LEGO did make the set "Merida's Highland Games", but it was part of the Disney Princess theme, which meant that among other things Merida was a LEGO Friends figure and she seemed to be based on her redesign, so I didn't buy it. But the triplet bear cubs and Merida's hair piece were exactly right, so I've used that hair piece in this set.