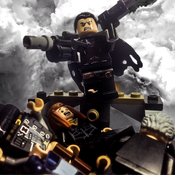 While browsing through LEGO Ideas, I've noticed that there are no projects based on Naomi Novik's amazing Temeraire series. Ergo, I have decided to create the first. The Temeraire series is of a fantasy / alternate history genre and is set during the Napoleonic Wars, but with a catch: there are dragons, manned by crews of aviators, who form the airforces of that time. The series follows Captain Will Laurence and his dragon, Temeraire as they fight for Britain as part of the Aerial Corps. I recommend this series to anyone who enjoys reading fantasy or alternate history novels.

Temeraire - Mountain Hut is set during the the first book, His Majesty's Dragon (HMD), towards the start of the book when Laurence and Temeraire have to leave their friends to train as part of the Aerial Corps. It may not appear as an actual scene in HMD, but LEGO sets are rarely exactly the same as the scene that they were based on. The project includes 3 characters:

Temeraire has been designed so that he is flexible, yet sturdy. The joints used in his construction include:

Apart from the joints, there are lots of other features that add to the detail. These include:

The mountain hut is a log cabin covered in snow. The top level is detachable so that you can access the bottom level beneath. Inside, it contains a few gadgets. These include:

This is the first Temeraire project that I've made, and I'm planning on at least two more to come.

Thanks for checking this project out and please support!