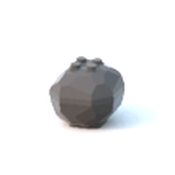 This Lego creation is of a dark space voyager that can interchange between a spaceship and a land vehicle by pushing down the wheels. The creation contains two minifigures and four asteroids as sidepieces to the voyager. The purpose of the set is to have a build that has more than one function to appeal to a larger audience. I beleive this creation would make a good lego set due to it's multifuncitonality and story that is present but can be changed by the user.

In the scene shown in the main picture, the dark space voyager is in spaceship form and has encountered an extraterrestrial that roams around in astroid belts.