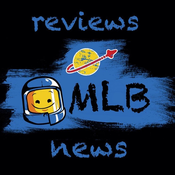 By MARKLEGOBOY
32 comments
Krasnodar Stadium is the greatest architectural structure in my hometown.  The stadium can be attributed to the best of its kind.  The stadium has UEFA category 4 - the stadium of the highest category, with the right to host the final part of the World Cups, European Football Championships, as well as matches of all stages of the UEFA Champions League and UEFA Europa League.
The set consists of quite popular parts and does not have complex fasteners. The set contains about 5000 parts, which are placed on a wooden plate 75 by 75 centimeters (96 by 95 pins). The base consists of a grey railway with a width of 8 pins, and the stadium itself consists of a black railway with a width of 6 pins.
You can check full review on my YouTube channel: