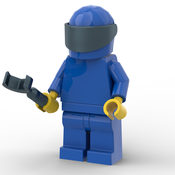 Let me tell you the story of creation of this exciting racing car model.

It's all started around 2010-2012. At that time I was drawing a lot of weird car concepts just for fun of it. There was some six-wheelers, mid-engine sedans and other strange stuff. One of it was a concept of racing pickup truck with wide body, V10 engine with exhaust pipes going throw the hood and a really big wing in the back. In all the years that has passed since, almost all of my drawing was lost. But half a year back I unexpectedly found some old papers and one of them was this pickup.

As a Lego Technic fan I've always wanted to build something unique, truly breathtaking. And now there was a way to do it without any financial investment with digital designers. I decided to recreate my old concept in Lego bricks and later on to buy all the bricks needed to build it. It took me few days to understand basics of LDD and Studio IO and start working on my image of the car. I wanted it to be big, with maximum functional pieces. And the most important thing - it needed to be build with as much standard non-technic Lego bricks as possible, because I wanted it to look solid, like a real scale model.

All the process of designing and building took me two mounts to complete. As I was searching a way to order parts to build my model, I've discovered Lego Ideas, so why not?) It took me another half a month to optimize the model to comply with the rules of 3000 pieces.

So let me present to you Ultimate Street Racer.

But in any case thanks for reading!